New Delhi: Union Minister for Road Transport, Highways and MSMEs Nitin Gadkari has called for adopting an integrated approach for developing indigenous fuel cells in the field of electric vehicles. He said, India today stands at the cusp of becoming a world leader in this field. The Minister urged scientists, academia and industry to harness hydrogen-based energy, it being a cost effective and easily available mode in the country. He indicated towards the lowering costs of solar power in India, which can help energise other modes of fuels. Union Minister for Road Transport, Highways and MSMEs Nitin Gadkari addressing the meeting on developing indigenous fuel cells in the field of electric vehicles in New Delhi on 10.02.2021. 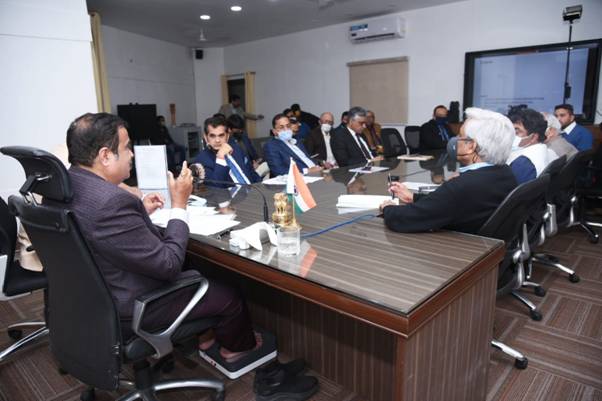 Participants at a meeting on developing indigenous fuel cells in the field of electric vehicles in New Delhi on 10.02.2021.

The Minister said, there is vast scope in the area of Lithium-ion battery too despite countries like China dominating in the sector. He said, India’s mining entities could look for acquiring component assets globally and grab the opportunity as there is still 49 per cent scope in this field. Shri Gadkari indicated towards the growing pace of automobile industry which has a turnover of Rs 4.5 lakh crore at present, and is set to reach Rs 10 lakh crore very soon. He also said that initially one crore vehicles will go for scrapping under the new vehicle scrapping policy, which will result in availability of cheaper aluminium, copper, rubber, steel and other products. He said, these will have the potential to reduce the price of battery components.

The Minister suggested to take ahead the suggestions brought forth in the meeting by integrating industry experience in the field. He assured the participants of his complete commitment in adopting best technologies. He said, next generation batteries will not only minimise vehicular pollution in India but make India a global supplier of EVs.

NITI Ayog CEO Shri Amitabh Kant stressed upon concentrating on lithium-ion alternative batteries and supported the idea of mining companies exploring opportunities abroad for acquiring assets in this regard. He said, NITI Ayog has collaborated with four IITs including Guwahati and Delhi for research in aluminium-ion batteries.